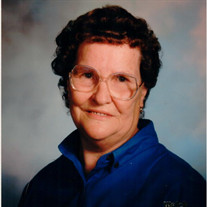 Adeline May Morden Jehnzen by Adeline I was born February 7, 1928 in Martiny Township, Mecosta County, Michigan. I attended West Branch School on 13 Mile Road between 100th Ave and 110th Ave on the south side of the road through first and second grade – all grades through the eighth grade were in one room. There was no kindergarten level. This school consolidated with the Mecosta School in 1936. When attending West Branch my brothers and I walked to school a little more than two miles. We usually cut across fields and walked part way on the rails. Using the rails and fields made our walk much shorter. In the fall of 1936, my younger brother, George and I went to school in Mecosta, the first few years the bus came into our yard to turn around and picked us up right at the door. One bus going out west of Rodney picking up children from the Rood household and the Thurston home. Another route was up to Chippewa Lake road and back down to pick up the Gregory children and also picked up Frank and Maggie Jehnzen’s family – Adolph, Ada, Carl and Wilma. In the summer my mother would pack a lunch and the family would walk over to Perch Lake, carrying fishing poles, bait, drinks, lunch and boat oars. We often sat out on the lake and ate our lunch in the boat. Sometimes when the blueberries were ripe, we had blueberries with our lunch picked fresh. If the berries were ripe, my mother and I, after lunch while the men fished, picked blueberries. Our lunch consisted of bread and butter sandwiches, pickles, tea or water – often warm as we did not have ice, potato salad and fresh cucumbers from the garden. It was plain and simple but we had a wonderful time and enjoyed every minute of it. After dropping out of school in 1942, I remained home for three years. I helped with house work and farm work. I then married Adolph Jehnzen on October 6, 1945 (we both shared the birthday of February 7). We lived on his father’s farm for 2 ½ years and farmed. For Adolph and my second anniversary, a son was born, Ira Allen. We left Adolph’s father’s farm in the spring of 1948 and moved to the John Miller farm (the place where I was born) on 90th Ave. We rented on shares and spent about 2 ½ years there. While living on this farm Adolph and I got a daughter, Margaret Ann, April 14. After leaving this place we rented the farm just ¼ mile south and on the other side of the road. This move was made in November 1950 where we rented and farmed again on shares. On November 3, 1953 we purchased the farm of 81 acres and continued to farm as long as health permitted. In July of 1970 our lives changed when Adolph had a heart attack and became disabled. Both of our children were grown and away from home, I wasn’t needed as badly at home and I went out and worked. My first job was at Kelsey Memorial Hospital in Lakeview, MI. I worked here for 4 years and my pay was $2.40 per hour and I worked as a cook. I was cooking for 100 to 200 people at every meal, a huge change from cooking for my family of four at home. In August of 1974 I went to work at Big Rapids Tube in Big Rapids, MI and my pay was $8.00. My job was to make filler tubes for car gas tanks. I retired from Fitzsimons (formerly Big Rapids Tube) in 1990 – where I held the #1 seniority for all but 1 year. Since retiring, I have made over 150 lap quilts, some for my friends, neighbors, kid quilts for police cars, nursing homes, and some for VFW homes. I have made several full sized quilts for myself, for sale, for family and for the Ladies Auxiliary (VFW). I have finished quilts that others have started and I have quilted for hire. I enjoyed gardening, canning and caring for house plants, of which I have way too many. I never have traveled much and don’t care much for it now, especially long distances and large towns. The farthest that I have traveled was to Mackinaw City with my daughter, Ann, and my granddaughter, Melissa. The highlights in my life were getting married, having my children, enjoying my grandchildren, and great-grandchildren. My saddest times are many. Arthritis keeps me from doing the things that I enjoy. My children’s health problems I wish that I could make them go away and I guess the saddest is not having my husband, Adolph with me now (he died in 1985). Adeline May Morden Jehnzen by her children Mom’s life continued with gardening, sewing, crocheting and her family. Her favorite past time was trying to keep her family in line. Adeline was preceded in death by • Her parents – Ira Morden and Bessie Robinson Morden • Her husband – Adolph Jehnzen • Her brothers – Dan and George Morden • Her daughter-in-law – Peggy Jehnzen Adeline is survived by: • Her two children – Allen Jehnzen and Ann Jehnzen Purcell (Tom) • Her grandchildren o Scott (Ursula) Jehnzen o Melissa (Craig) Purcell Wilkinson o Betsy (Craig) Castle o Robert Purcell o Tony (Susan) Purcell • 16 great-grandchildren o Scott Perkins o Anglique Jehnzen o Spencer Wilkinson o Katharina Jehnzen o Alexandra Purcell o Justyn Polzin o Faith Jehnzen o Kellie Purcell o Rebecca Jehnzen o Colby Castle o Arika Purcell o Johnathan Jehnzen o Janet Purcell o Allen Purcell o Kaeleb Purcell o Josiah Jehnzen Great – great-granddaughter o Sasha Jehnzen

Adeline May Morden Jehnzen by Adeline I was born February 7, 1928 in Martiny Township, Mecosta County, Michigan. I attended West Branch School on 13 Mile Road between 100th Ave and 110th Ave on the south side of the road through first and second... View Obituary & Service Information

The family of Adeline May Jehnzen created this Life Tributes page to make it easy to share your memories.

Adeline May Morden Jehnzen by Adeline

Send flowers to the Jehnzen family.