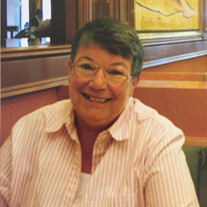 Andrea L. Pfaendtner, age 73, of Stanwood, MI passed away on May 26th, 2017. She will be lovingly remembered by her husband John R. Pfaendtner, her children Amy and Jeff Patterson, John and Martha Pfaendtner, Carrie and Brad Frieswyk, Jim and Jill Pfaendtner, along with her seven grandchildren Joshua Williams, Bradley Patterson, Katrina Patterson, Cora Frieswyk, George Frieswyk, Josephine Pfaendtner, and John A. Pfaendtner. In addition, she had four great-grandchildren Audriena, Kayden, Natalie and Nash. Andrea is also survived by her four siblings Michael Seeley, Sue Kohn, Denise O’Mara, and Dave Seeley, as well as many nieces and nephews. Andrea spent her first 42 years living in the Detroit area. She worked as an administrative assistant for General Motors for 15 years, until she and her family moved to West Michigan in 1986. Andrea enjoyed the textile arts such as knitting, sewing, and quilt making, participating in various quilt and knitting groups. The friendships she made from these communities were near and dear to her heart, and the family is grateful for the outpouring of love her friends have shown. In addition to her hobbies, she loved to travel, visiting roughly 20 countries in the last 10 years – not to mention the many vacations she took to visit her family. She was an advocate of women and children’s issues, and in recent years became very interested in progressive politics. She was always asking herself what she could do to help, for example her latest project was knitting pink hats for women participating in the recent marches. In lieu of flowers, please send donations to Planned Parenthood, an organization Andrea strongly supported throughout her life. Visitation will be held on Thursday, June 1, from 10:00 -12:00, with a service to immediately follow at Janowicz Family Funeral Home in Remus, MI.

Andrea L. Pfaendtner, age 73, of Stanwood, MI passed away on May 26th, 2017. She will be lovingly remembered by her husband John R. Pfaendtner, her children Amy and Jeff Patterson, John and Martha Pfaendtner, Carrie and Brad Frieswyk, Jim and... View Obituary & Service Information

The family of Andrea L. Pfaendtner created this Life Tributes page to make it easy to share your memories.

Send flowers to the Pfaendtner family.