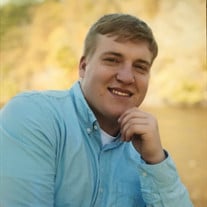 It’s hard to imagine a world without our vibrant son, brother, grandson, and friend, Andrew Scott Vinton, in it. Gone much too soon from this earth, Andrew passed away unexpectedly, Friday, May 31, 2019. He was only 20 years old. A funeral service will be held to celebrate his life, Wednesday, June 5th, at 12:00 PM, at St. Michael Catholic Church in Remus. Fr. Tom Boufford will officiate with a luncheon to follow at the parish center. Visitation will take place at the church on Tuesday evening from 4:00 PM to 8:00 PM, and again on Wednesday morning from 11:00 AM to the time of service. Those desiring may direct memorial donations to St. Michael Church in lieu of flowers.    Andrew, AKA “A.V.”, was born on April 22, 1999, the son of Scott and Tammy (Flachs) Vinton. Born and raised in Remus, Andrew was a 2018 graduate of Chippewa Hills High School, where he had many friends, teammates, teachers, and coaches that he looked up to and loved. He was on the football team and wrestling team while in school. Andrew enjoyed hunting, but his passion was always fishing. He was known as the “Bass Master”, and would frequently say, “fishin’ in all conditions”. His personality and laugh could light up a room, and his sense of humor could bring a smile to any face.  Andrew was currently enrolled at Mid Michigan Community College with hopes of becoming a Conservation Officer. During his down time, his favorite thing to do was eat; especially when his grandpa would cook a steak dinner. Family and friends were Andrew’s world; he loved time spent with his cousins, and always enjoyed playing with kids.  His perpetual hugs and caring nature will be so deeply missed by his parents, Tammy and Scott; sister, Kylee Vinton; grandparents, Steve and Lonna Flachs, Bonnie Vinton, and Barb Vinton; great-grandmothers, Donna Flachs, and Sheila Wiles; special friend, Jessica Earl; many aunts, uncles, cousins, and friends, and beloved dogs, Lady and Skeeter.  Andrew was preceded in death by his grandfather, Zane Charles Vinton; aunt, Kristina Flachs, and cousin, Kaylee Flachs.

It&#8217;s hard to imagine a world without our vibrant son, brother, grandson, and friend, Andrew Scott Vinton, in it. Gone much too soon from this earth, Andrew passed away unexpectedly, Friday, May 31, 2019. He was only 20 years old. A funeral... View Obituary & Service Information

The family of Andrew Scott Vinton created this Life Tributes page to make it easy to share your memories.

It’s hard to imagine a world without our vibrant son, brother,...

Send flowers to the Vinton family.