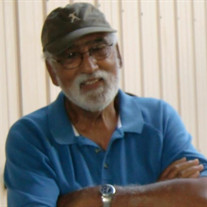 Arlo Ronald Guy, Blanchard, Michigan A light has been dimmed with the passing of our beloved Arlo Guy on April 9, 2017. Arlo was born in Blanchard, Michigan on January 26, 1933 to Smyth and Irma Guy. He attended Michigan State University and was a lifelong Spartan fan. Arlo also served in the U.S. Army. In 1960, he married the center of his universe, Carolyn Sanders. Together they had four children. Arlo worked in several capacities for General Electric and Hitachi Magnetics, retiring as Human Resources Manager after 39 years. Outside of work, while raising his family, he made many contributions to his community as coach, umpire and active dad in his children’s school activities. He also served on the Montabella School Board for several years. A gifted vocalist, as a smooth, effortless tenor, he sang in numerous weddings and variety shows in his community. Arlo also was an avid golfer for many years, often organizing company golf outings. In addition, he was an excellent cook, who excelled on the grill and loved to entertain guests. He was a longtime gardener, who each summer provided a bounty of fruits and vegetables for family and friends. Arlo also loved traveling and developed a particular fondness for the Caribbean and the gorgeous sunsets. He was an excellent photographer who gave many friends a chance to see his travels through his eyes. Arlo always had a quote waiting for you regardless of the situation. These quotes lovingly became known as “Arloisms”. Left to cherish his memory are his wife of nearly 57 years, Carolyn; son, Michael (Janelle) Guy; daughters, Debbie (Otis) Edmonds, Ronda (Manning) Wright and Lori Robinson; brother, Harold (Mary) Guy; sister-in-law Helen Morgan; grandchildren, Whitney, Nickolas, Sterling, Spencer, Mackenzie, Taryn, Nicole, James, Kristina, James, Kayla, and Aaron; one great-grandchild, Zurion and special neighbors Jerry Sawyer and Jackie Conrad. Arlo was preceded in death by his parents as well as siblings, Otis Guy, Audra Lett and Gertrude Smith. A funeral ceremony will be held, ‪Thursday, April 13, 2017 at 11:00 a.m. at New Hope United Methodist Church in Mecosta Michigan, with Dr. William Guy officiating. Burial will follow in Pine River Cemetery and will include military honors. Visitation will be held ‪Wednesday evening from 5:00-8:00 p.m. at Janowicz Family Funeral Home in Remus, Michigan and again on Thursday, one hour prior to the service at the church. Those desiring may direct memorial contributions to the American Heart Association or to St. Jude Children’s Research Hospital. Envelopes will be available at the church.

Arlo Ronald Guy, Blanchard, Michigan A light has been dimmed with the passing of our beloved Arlo Guy on April 9, 2017. Arlo was born in Blanchard, Michigan on January 26, 1933 to Smyth and Irma Guy. He attended Michigan State University... View Obituary & Service Information

The family of Arlo Ronald Guy created this Life Tributes page to make it easy to share your memories.

A light has been dimmed...

Send flowers to the Guy family.