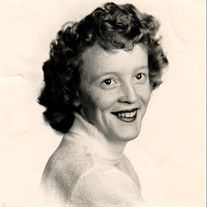 Barbara Jean Oplinger, age 87 of Weidman, passed away late Wednesday evening, March 1, 2017, at McLaren Central Michigan in Mount Pleasant. Her family invites friends and relatives to join them at Janowicz Family Funeral Home in Remus on Monday, March 6th from 1:00 PM to 4:00 PM for a viewing. A private burial will follow on Tuesday at Foresthill cemetery in Weidman. Barbara was born April, 6, 1929, the daughter of Joseph and Edna (Salchert) McDonald. She married the love of her life, Earl Oplinger, on November 24, 1950, and together the two grew their family to include two sons. She enjoyed fishing, playing cards, dancing, and time spent at the house in Canada with her grandchildren. A farm wife all her life, Barbara was well acquainted with hard work. Her feisty and sometimes sassy nature will be greatly missed by her husband of over 65 years, Earl; sons, Kenneth (Vicki) Oplinger and Edward (Sandy) Oplinger; sister, Eileen Rau; special cousin, Deborah Bigelow; grandchildren, Ashleigh Higgins, Trevor (Kristin) Oplinger, Emily (Dustin) Battle, and Kacy (Jay) Brown, and seven great-grandchildren, Ahren, Kaelyn, Ellery, Layne, Gabby, Jordan, Gracelynn, Jaydence, and Jayvian. Barbara was preceded in death by her parents; brother, Edward McDonald, and sister, Marguerite Rice. Those desiring may direct memorial contributions to a charity of your choice in lieu of flowers.

The family of Barbara Jean Oplinger created this Life Tributes page to make it easy to share your memories.

Send flowers to the Oplinger family.