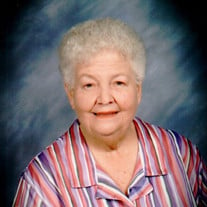 BEVERLY RAE RUSSELL BROWN passed away September 19, 2019 at Altercare in Big Rapids, MI surrounded by Family. She was born May 5, 1931 in Winfield, Cowley County, Kansas.  She was the 2nd daughter of Orville J. Russell and Helen Mae (Price) Russell.  She graduated from Wyandotte High School in Kansas City, Kansas in 1949.  She was employed with Sutherland Lumber Company in Kansas City, Missouri, until she married Norvil L. Brown in 1963; Beverly and Norvil began team teaching 4th and 5th grade Sunday School before they married. After moving to Traverse City, Michigan in 1969, Beverly taught 5th and 6th grade Sunday School classes.  She volunteered in the library at Glenn Loomis Elementary, became a well-known storyteller in all of the elementary schools in Grand Traverse County in her role as the beloved, Mrs. Switch the Witch (de-bunking witchcraft as she went telling, the "Pumpkin Smasher", or Mrs. Switch the Witch story authored by Anita Benarde).  Beverly was also a speaker and encourager in the junior high school, and was a Cub Scout den mother for several years in Traverse City.  She was co-chair of the Grand Traverse Regional United Fund Campaign in 1979-80, and was named a WCCW Good Guy in 1980.  She served as Youth Group leader, and taught an Adult Bible Study at Canton United Methodist Church.  Beverly was a lay delegate to the Detroit Annual Conference United Methodist Church in 1983-1984. In 1991 she helped in the physical construction of her new home in Mecosta County.  She served as coordinator for funeral dinners at New Hope United Methodist Church, led the prayer chain for several years, and originated the practice of delivering Christmas baskets at New Hope United Methodist Church.  Beverly was cluster leader for the Northwest cluster, Central District (now Midwest) United Methodist Church.  She was a member of the United Methodist Women, serving 2 years as President of Faith Circle and participated in many fundraising dinners.  She was the recipient of the Dove Award.  Her generosity benefited many through her help with school books, appliances, food, and miscellaneous needs.  Beverly was also a frequent visitor to the shut-ins when she was able.   She is the mother of Marsha Rae (David) Toler, and David Norvil (Peggy) Brown; beloved step-mother of Debra K. (Kelly) Morris and the late Teresa Lynn Brown.  Beverly is the Grandmother of Shanna Chavez, Megan Thomson, Marisa Barnett, Samuel Morris, Carolyn, Catherine, and Christopher Brown. She is the Great-grandmother of Olivia Morris, Callum Thomson, Aubrey Morris, Elizabeth, DeAndre Jr., and Lynice Barnett.  She was the Sister of the late Sandra Russell and Evelyn Graham.  Beverly also had many nieces and nephews. A funeral service for Beverly will be held Monday, September 23, 2019, at 11:00 AM, at New Hope United Methodist Church in Mecosta, with Pastor Carman Minarik officiating. Visitation will be held Sunday afternoon from 3:00 PM to 6:00 PM at Janowicz Family Funeral Home in Remus, and again on Monday from 10:30 AM to the time of service at the church. Burial will take place at a later date in Kansas City Missouri, at Floral Hills Cemetery.  Those desiring may direct memorial contributions to the New Hope Church Building Debt Fund. Envelopes will be available at the funeral home and church.

BEVERLY RAE RUSSELL BROWN passed away September 19, 2019 at Altercare in Big Rapids, MI surrounded by Family. She was born May 5, 1931 in Winfield, Cowley County, Kansas.  She was the 2nd daughter of Orville J. Russell and Helen Mae (Price)... View Obituary & Service Information

The family of Beverly Rae Brown created this Life Tributes page to make it easy to share your memories.

Send flowers to the Brown family.