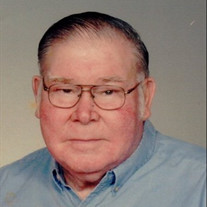 Carl “Tuff” Lester McQueen, age 85 of Remus, passed away Wednesday, January 13, 2021. A visitation will take place Sunday, January 17th from 1pm to 3pm at Janowicz Family Funeral Home in Remus.   Carl was born October 5, 1935, the son of Leo and Lena (Swan) McQueen. He proudly served his country in the United States Army during the Korean war. In his younger years, he owned a racecar and would frequent the Mt. Pleasant Speedway, where he had a driver race his car. Carl enjoyed playing cards, visiting with friends, and spending time with his grandchildren. He was a member of New Hope United Methodist Church for years, and a member of the Blanchard American Legion. Carl could often be found “tinkering” with something, rarely ever sitting still. His sense of humor and inquisitiveness will be greatly missed by his daughter, Carla Stanley and her son, Mark Stanley; step-children, Cheila (Kevin) Denslow, Marv (Tina) Reichert, Brian (Denise) Reichert, Brenda Reichert, Kyle (Lori) Reichert, Renee (Chris) Torpey, and Bonnie (Dave) Roberts, and many grandchildren and great-grandchildren. Carl was proceeded in death by his wife, Constance “Connie” Marie McQueen; his parents; six siblings; three grandchildren; one great-grandchild, and sons-in-law, Neil and Tim. Those desiring may direct memorial contributions to New Hope United Methodist Church in Mecosta, or to the Mecosta County Commission on aging. Envelopes will be available at the funeral home.

The family of Carl Lester McQueen created this Life Tributes page to make it easy to share your memories.

Send flowers to the McQueen family.