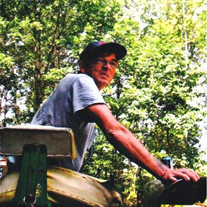 Charles “Chuck” Martin Foster, age 58 of Mecosta, passed away February 15, 2015 at his home surrounded by family. Chuck was born April 19, 1956 in Lakeview, MI, the son of Ivo and Thelma (Silas) Foster. After he graduated from Chippewa Hills, Chuck joined the Marines. For many years Chuck was a truck driver and at one time was an owner/operator. He loved being around his family, and especially enjoyed the company of his grandchildren and pets. On his free time, he enjoyed hunting adventures and telling stories of his youth. He enjoyed watching the rabbits through his dining room window with no will to shoot them. Chuck also enjoyed snowmobiling and went out west several times. He spent many mornings hanging out at local diners for coffee and conversation. This kept him up on all of the current events. Pam Tillis and Sara Evans were his music heartthrobs; he would tease his wife that when he was in Tennessee he was going to meet up with them. He loved pulling the float in the Remus Heritage Days Parade, and scheduled home time around these events. Chuck also enjoyed pulling the hay wagon with his tractor at family reunions; you could always see the joy on his face as he watched his family and all the kids enjoy the ride. No matter if it was with a tractor or semi truck, Chuck was a hauler…. But above all, his favorite thing was giving out hugs, and everyone enjoyed a bear hug from Chuck. Left to cherish his memory are his wife, Tammy (Richmond) Foster; children, Treasha (Bryce) Myers, Tory (Sheena) Vickers, and Trinna Vickers (Mike Recker); brothers, Richard and Randall Foster; sisters, Beverly Finn and Conda Carpenter; 11 grandchildren; many nieces and nephews, and his guardian “Dozer”. Chuck is preceded in death by his parents; sisters, Carolyn and Judy; brother, Gary and grandson, Cole. Friends may share a memory with the family at the pole barn get-together later in the spring. To all Chuck’s truck driving/ hauler friends, he would tell you to “motor easy”. “Chuck, love you bunches and bunches clear up to the heaven!” –Your wife, Tammy

The family of Charles "Chuck" Foster created this Life Tributes page to make it easy to share your memories.

Send flowers to the Foster family.