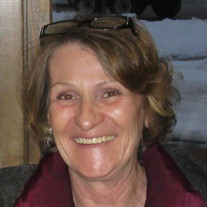 Connie Louise Wernette, beloved wife, mother and grandmother, passed away October 24, 2017 at her home, at the age of 63.  A Funeral Mass will be held on Saturday, October 28th at 11:00 AM, at St. Michael Catholic Church in Remus with Father Tom Boufford as celebrant.  Visitation will be held on Friday, October 27th at the church from 4:00-8:00 PM with a Scripture Service at 7:30 PM.  The family will greet friends again from 10:00 AM until the time of service on Saturday.  Burial will follow the service at St. Michael’s Cemetery.   Connie was born October 21, 1954 in Hersey, MI, the daughter of Duane and Nelda (Reed) Metcalf.  She married the love of her life, Steve Wernette on August 25, 1972, and together the two grew their family to include six children. Connie worked at McLaren Health Services in Mount Pleasant for many years, building numerous friendships along the way. She had a way of making others feel special due to her genuinely caring nature. Known as “mom” by many, Connie even made quite the impact on her kids’ friends. She enjoyed cooking, playing cards on the computer, and lived for time spent with her grandchildren, attending sporting events, band concerts, award ceremonies, and just spoiling them with all her love. Connie had a great sense of humor and outgoing personality. If there was an event that involved dancing, you bet she was one of the first people on the dance floor. Her loving nature will be greatly missed by her husband of 45 years, Stephen Wernette; children, Andrea (Scott) Ruggles, Shelli (Tony) Earle, Melissa McArthur, Chad (Tera) Wernette, Erica Wernette and Eric Wernette; 13 grandchildren; brothers, Steve and Scott Metcalf; sisters, Gina Vincent, Tammy Dyer, and many nieces, nephews and friends. Connie was preceded in death by her parents, her father and mother-in-law, Durward and Doris Wernette and nephews Nicholas Wernette, Dennis Metcalf and Riley Schmidt. Those desiring may direct memorial contributions to St. Michael’s School or Hospice of Michigan.  Envelopes will be available at church.

Connie Louise Wernette, beloved wife, mother and grandmother, passed away October 24, 2017 at her home, at the age of 63.  A Funeral Mass will be held on Saturday, October 28th at 11:00 AM, at St. Michael Catholic Church in Remus with Father... View Obituary & Service Information

The family of Connie Louise Wernette created this Life Tributes page to make it easy to share your memories.

Send flowers to the Wernette family.