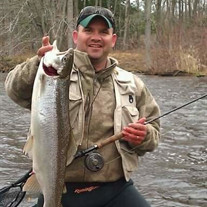 Corey Ray Wilhelm, well-known master BBQ chef, outdoorsman and trickster, was born into eternal rest Monday, May 6, 2019 at his home with his most favorite people by his side. Corey was only 45 years old.  Corey requested his life celebration to be a “Corey style cookout”, and will take place May 18that 3pm, located at the Canadian Lakes Reuther Music Pavilion on Pierce Beach.    Corey was born January 26, 1974, in Tacoma, WA, the son of Darwin and Diane (Embree) Wilhelm. He was raised in Oregon (hence the reason he was such a Ducks fan). He met his true soul mate, Raenelle VanDriel, and moved to Michigan in 2000 The two were married June 19th, 2004 and spent 19 wonderful years together with their sons in Canadian Lakes. Corey was currently working for Lakeside Motorsports as a sales manager. Being a people person to his core, this was a great fit for Corey.  Playful, loving, energetic, outdoorsman, and adventurous, were all words used to describe Corey. He had a magnetic personality and his inner child spoke very clearly to children. Most days he could be found playing a prank on someone, and you could only hope it wasn’t you. He was so full of life, always up for an adventure, and could put a smile on your face in an instant.  Corey will be so deeply missed by his wife, Raenelle Wilhelm; parents, Darwin and Diane Wilhelm; sons, Mikel (Alyssa) Wernette, Luke Wernette, and Zachary Wernette; brother, Brian (Michelle) Wilhelm; nephews Zaden and Gauge, sister; Kristen Wilhelm (Greg Vaughn), nephew Garrett Carter; Godsons, Jordan (Jennifer) Hiatt, Corwin (Hannah) Hiatt, and Aaron “Bear” Hiatt; grandmother, Mary (Donn) Taylor, and many nieces and nephews. Corey was preceded in death by three grandparents; his mother-in-law; many aunts and uncles, and his dog, Gus.  A last message to everyone from Corey, “Don’t be sad I’m leaving you” (Huge grin), And don’t forget to smile”.      Go Ducks!

Corey Ray Wilhelm, well-known master BBQ chef, outdoorsman and trickster, was born into eternal rest Monday, May 6, 2019 at his home with his most favorite people by his side. Corey was only 45 years old.  Corey requested his life celebration... View Obituary & Service Information

The family of Corey Ray Wilhelm created this Life Tributes page to make it easy to share your memories.

Send flowers to the Wilhelm family.