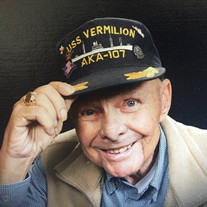 Donald “Don” Paul Ziemke, Sr. age 94 of Mecosta, MI peacefully went into the arms of his Lord and savior Saturday, October 12, 2019 at his home. A Funeral Mass will be held Friday, October 18, 2019, at St. Michael Catholic Church in Remus, at 11:00 AM, with Father Tom Boufford as Celebrant. Visitation will take place Friday morning at the church from 9:00 AM to the time of Mass. Burial will follow in Riverview Cemetery in St. Joseph, MI.   Don was born October 5, 1925, the son of Herman Henry Hugo and Ella Marie (Wenzlaff) Ziemke. He proudly served his country in the United States Navy during WWII and Korea. Don was a member of the Michigan City Managers Association (past president), VFW, Knights of Columbus, Rotary, Lions Club and an active member of St. Michael church for over 20 years. He held degrees from Rice and Michigan State. He served as city manager of St. Louis, Muskegon Hts., and Portage, MI. Don and his wife, Mary Pat, enjoyed winters in Lakeland, FL and always had season tickets to see the Tigers during spring training. His German heritage was something he was proud of, even speaking German while growing up. That heritage allowed him to be persevering and self disciplined, which he passed on to his children. Don was a man of high integrity and lived his life with high expectations and principals. He was a good handyman, even building three of his own homes, a great father to his children, and a wonderful husband to his wife. Don is survived by his loving wife of 59 years, Mary Pat (O’Malley); brother, Duane Ziemke; children Joy, Don (Lisa) and Bill (Eileen); grandchildren, Kelly Fleming and Paul, David, Jordan, Tyler, Jennifer, Megan and Mark Ziemke. Don was preceded in death by his parents; sister and brother-in-law, Delores and Bob Grau; and sister-in-law, Mary Lou Ziemke. Those desiring may direct memorial contributions to St. Michael’s School.

The family of Don Ziemke created this Life Tributes page to make it easy to share your memories.

Send flowers to the Ziemke family.