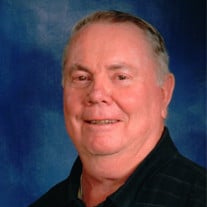 Donald F. Marfilius, age 73 of Canadian Lakes, passed away on Wednesday, October 8, 2014 at Spectrum Health – Butterworth Hospital in Grand Rapids. Mass of Christian Burial will be held Tuesday, October 14 at St. Michael’s Catholic Church in Remus with Father Aaron Ferris as celebrant. The family will greet relatives and friends on Monday, October 13 from 5:00 – 8:00 PM with a Scripture Service at 7:00 PM at Hansen Janowicz Funeral Home in Remus. Don was born in Bridgeport, WI on April 29, 1941 the son of Clarence Joseph and Martha Irene (McCarthy) Marfilius. He and his wife, Lasandra “Sandi” (Leonard), just celebrated their 50th Wedding Anniversary this year by going to Mackinaw in July. Don and Sandi moved to Canadian Lakes from Farmington Hills, MI in 2002 after his career there as a Chemical Engineer. The move allowed him more time to relax. He loved the game of golf, as well as, euchre and bowling with friends. He even had a neighbor that fondly called him the “lawn boy”. Don was a member of the Knights of Columbus at St. Michael’s. He loved watching the deer but joked that battling the moles in his yard was a big job the last two years. He loved his family very much and was so proud of his children and grandchildren. Along with his wife, Sandi, Don is survived by one son, Greg (Trina) Marfilius; one daughter, Terri (Steve) Taglauer; two brothers, Lyle and Lewis. He was Papa to his five grandchildren, Alex, Megan, John, Andi and Natalie. Don was preceded in death by his parents and his brother, Kenneth. In lieu of flowers, the family has requested that donations be made in memory of Don to God’s Helping Hands at 8944 50th Ave. Remus, MI 49340. Friends may share a memory with the family at the funeral home, church or online at www.hansenjanowiczfuneralhome.com

The family of Donald F. Marfilius created this Life Tributes page to make it easy to share your memories.

Donald F. Marfilius, age 73 of Canadian Lakes, passed away on...

Send flowers to the Marfilius family.