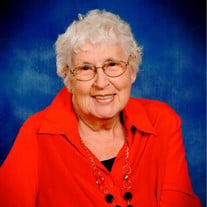 Donna May Flachs, age 92 of Remus, passed away Saturday, June 20, 2020 in Mt. Pleasant, MI.  Burial will take place on Thursday, July 2, 2020 at 11:00 AM at St. Michael’s Cemetery with Father Tom Boufford officiating.  A Memorial Mass will be held at St. Michael Catholic Church at a later date. Donna was born in Lakeview, MI on January 28, 1928, the daughter of Milo and Lulu Hansen.  She married Walter Flachs on February 7, 1947, and the two grew their family to include eight children. Her love of cooking lead her in many different directions, from cooking Sunday dinners for her family, to baking pies and donuts for St. Michael’s.  Donna was famous for her no-bake cookies,which she made exactly one million and one and no one would dare try to recreate.  Donna was an avid crocheter. Quiet, loving, and the best grandma ever, were all words used to describe her. She loved fishing trips to Canada and going to dances with friends, and thoroughly enjoyed those she worked with at Ore-Ida for 21 years.  Left to cherish her memory are her children, Stephen (Lonna) Flachs, James (Linda) Flachs, Thomas Flachs, and Mary (Rick) Roosa; sisters-in-law, Mary Flachs and Darlene Frumveller; God children, Duane Covelle, Pam Moore, and Romana Young; 18 grandchildren, 43 great-grandchildren, and two great-great-grandchildren. Sadly, Donna was preceded in death by her parents; husband, Walter Flachs; children, Terry & Larry, Richard, and Walter “Joe” Flachs; sisters, Mary Babcock and Geraldine Jensen; granddaughter, Kristina Flachs, and great-grandchildren, Kaylee Flachs and Andrew Vinton. Those desiring may direct memorial contributions to St. Michael Catholic Church.

The family of Donna M. Flachs created this Life Tributes page to make it easy to share your memories.

Send flowers to the Flachs family.