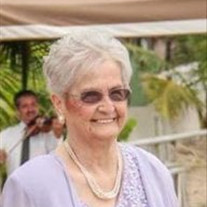 Dorothy L. Lipar, age 90, of Remus, passed away Tues., June 12, 2018 at McLaren Central Michigan in Mt. Pleasant.  A Funeral Mass will be held on Saturday, June 16th, at 10:00 AM, at St. Michael Catholic Church in Remus, with Father Tom Boufford as Celebrant. Visitation will be held at the church on Friday evening from 5:00 PM to 7:00 PM with a Rosary at 6:30 PM.               Dorothy was born September 7, 1927 in Ionia, MI, the daughter of Alvin and Beryl (Payne) Moore. She attended school in Harrietta, and eventually moved to Marshall, MI after marrying her first husband, George Lipar. Dorothy was an active Remus community member, and made many friends through her volunteer work in the area. She was on the Remus Heritage Days Committee, and helped with the Remus Historical Society as well as the Library. In her younger years, she even volunteered through EMS.  Dorothy was an independent, energetic and feisty woman that enjoyed time spent with her grandchildren. You always knew where you stood with Dorothy, as she was never afraid to give her opinion, and always speaking her mind.    Left to cherish her memory are her daughter, Deborah (Vincent) Mako; three sons, Paul (Phyllis) Lipar, Thomas (Melany) Lipar, and William (Brenda) Lipar; two brothers, William A. Moore, Richard A. Moore; 12 grandchildren, and ten great-grandchildren.  Dorothy was preceded in death by her parents; first husband, George H. Lipar; second husband, Robert Ohneck; brothers, Jack and Melvin Moore; infant brother, David Paul Moore, and sisters, Margaret Hurst and Connie Kinney.  Those desiring may direct memorial contributions to St. Michael’s School in Remus.

The family of Dorothy L Lipar created this Life Tributes page to make it easy to share your memories.

Send flowers to the Lipar family.