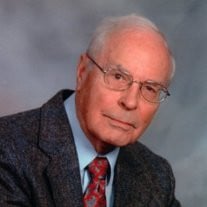 Age 101, passed away Saturday, June 1, 2013 at Royal View Reirement Village in Mecosta, MI. Ed was born December 13, 1911 at home on Church St., Highland Park, MI, to Edward Dyer Doane, Sr. and Anna Laura Pomeroy Doane. He grew up in Detroit and attended Central High School, graduating in 1928. He graduated from Detroit Institute of Technology with a Bachelor of commercial sciences degree in 1936. He worked at Michigan Bell Telephone until 1933 when he went to work at Michigan Mutual Insurance Company, where he retired from in 1976. He began his career at Michigan Mutual in the Travel Bureau for 23 years and ultimately attained the title of Assistant Vice President, working as an underwriter in the Inland Marine Department. He was honored as the oldest living retiree of Michigan Mutual (now Amerisure) in October, 2011. Ed was drafted into the U.S. Army in 1944 and served in Europe until 1946. In April, 1937, he married Margaret Alice McClusky. The two lived in several Detroit locations until moving into their new home on Prevost, where they lived until 1971. They moved to Howell in 1978, and Ed moved to Royal View Retirement Village in Mecosta in January, 2013. Left to cherish his memory are his children, Marianne (George) Satterley of Venice, FL, and Jan (Jerry) Doyle of Canadian Lakes, MI; grandchildren, James MacEwen, Cindy (Brian) Cochran, Scott(Ali) Doyle, and Bob Satterley; four great-grandchildren, Logan and Alexis Cochran, and Braden and Callen Doyle. Ed was a life member of the Howell Area Chamber of Commerce, member of First United Methodist Church and Howell Beautification Committee. He was also named Howell’s citizen of the year in 1999. He was preceded in death by his wife, Margaret in 2001, and his grandson , Ian MacEwen in 1976. He married lifelong friend, Elaine Classen in September, 2005 who passed away in 2010. Cremation has taken place and a memorial service will be held at the First United Methodist Church located at 1230 Bower St., Howel, MI on Thursday, June 13, at noon. Those desiring may direct memorial contributions to the First United Methodist Church in lieu of flowers.

The family of Edward D. Doane created this Life Tributes page to make it easy to share your memories.

Send flowers to the Doane family.