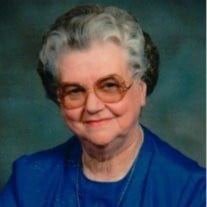 Elenor A. Doerr, age 88 of Remus, passed away peacefully at McLaren Central Michigan Hospital in Mt. Pleasant on January 16, 2013. Elenor was born on June 17, 1924 in Isabella County to Victor and Bessie (Lee) Doyle. Elenor first worked in Remus for the Diehm family, where she met and married Charles (Chuck) Doerr. After traveling for many years for Chuck’s job on the pipeline they settled in Mecosta to raise their family. She was very active in the Mecosta County Senior Center for many years and loved to go to the local dances. Surviving Elenor are her children, Larry (Fran) of Mecosta, Jim of San Diego, Ca., Ed of Mt. Pleasant, Gene of Mecosta and Karen (Mark) McKenzie of Mecosta, her grandchildren, Larry (Fern) Doerr of Mecosta, Debbie (Frank Jr.) Payton of Mecosta, Jennifer (Brent) Schriner of Webberville, Holly (Willard) Flowers of Remus and Drew (Rebecca Sohl) of Tampa, Fl., and eight great grandchildren whom she adored. She is also survived by her sister Mary Bringold of Mt. Pleasant, brothers and sisters in law Catherine Thurston of Sand Lake, Al and Dody Doerr of Mecosta and Bill Doerr of Mecosta as well as many nieces and nephews. She was preceded in death by her husband Chuck in 1965, 2 granddaughters Barbara and Malynda Doerr, daughter in law Patsy, sister Arlene and her husband Cliff Leiter, brothers and sisters in law Gale Thurston, Henry and Marion Doerr, Bernie and Arlene Doerr, Char Doerr, Glenn Smith Sr. and Harold Bringold. Cremation has taken place and a private graveside service will be held at a later date. A celebration of Elenor’s life will be held on Saturday, February 23rd, 2013 at the Morton Township Hall on Main St. in Mecosta from 2 to 4 p.m. In lieu of flowers, memorial contributions can be made to the Mecosta County Senior Center in her honor.

The family of Elenor Doerr created this Life Tributes page to make it easy to share your memories.

Elenor A. Doerr, age 88 of Remus, passed away peacefully at McLaren...

Send flowers to the Doerr family.