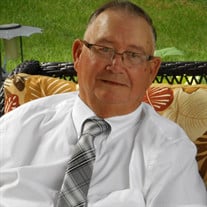 Gerald R. Stickler, age 78 of Remus, passed away Thursday, October 27, 2016. Services will be held on Tuesday, Nov. 1, 2016 at 11:00 AM at the Sylvester Community Church with Pastor Richard Taylor officiating. Visitation will be held Monday, at the Church from 5:00 PM to 8:00 PM, and again on Tuesday from 10:00 AM to the time of service. Interment will take place at Decker Cemetery in Blanchard. Jerry was born October 28, 1937 in Remus, the son of Seamer and Olive (Rees) Stickler. On September 19, 1959, he married Eleanor Baldwin and together the two grew their family to include three children. Jerry had a love for the land and the dairy farm was his life until he retired. Still wanting to be involved in the farm, he enjoyed watching over what was going on there. His life’s work also included being employed at the Chippewa Hills High School for 17 years as a Maintenance Supervisor. He was also a life member of the Eastern Stars and Masonic Lodge in Six Lakes. He liked to dance, hunt, and fish; and liked Bluegrass Music and old Western movies. Jerry had a great sense of humor, was quick witted and was a friend to everyone he met. There wasn’t a waitress in Mecosta county that didn’t know who he was when he walked through the door. Known as the “unofficial community watch”, Jerry enjoyed traveling the countryside in his golf cart. A favorite pastime of his was going to the cabin in Kalkaska with his wife, Eleanor. Jerry was extremely proud of his family, especially his children and grandchildren. In his younger years, Jerry would take part in rodeos and remained a lover of horses since. Left to cherish his memory are his wife of 57 years, Eleanor; three children, Wayne (Joan) Stickler, Kay (Steve) Ruffini and Jon (Lisa) Stickler; two brothers, Jack and Lloyd Stickler; four sisters, Jean May, Nelda Stratz, Alma Henning and Linda Knobloch; grandchildren, Tom (Kayla) Stickler, Bethany (Tyler) Fivecoat, Ashley Stickler, Dustin (Candace) Stickler, Neil Ruffini and Lauren Ruffini, and one great-grandson, Judah Jackson Fivecoat. He was preceded in death by his parents; brother, Glenn Stickler, and sister, Ada May.

Gerald R. Stickler, age 78 of Remus, passed away Thursday, October 27, 2016. Services will be held on Tuesday, Nov. 1, 2016 at 11:00 AM at the Sylvester Community Church with Pastor Richard Taylor officiating. Visitation will be held Monday,... View Obituary & Service Information

The family of Gerald R. Stickler created this Life Tributes page to make it easy to share your memories.

Send flowers to the Stickler family.