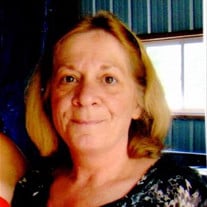 Jackie Ann Moore, our strong and determined wife, mother, and grandmother, passed away Saturday, June 17, 2017 at home, at the age of 60. A memorial service in her honor will be held Friday, June 23rd, at 11:00 AM, at Janowicz Family Funeral Home in Remus, with Chaplain Dan Pflug officiating. Visitation will take place at the funeral home on Thursday evening from 5:00 PM to 8:00 PM, and again on Friday morning one hour prior to the service. Jackie was born December 14, 1956, the daughter of Jack and Alice (Smith) Wilson. She was locally educated through Chippewa Hills High School graduating in 1975. She married the love of her life, Mike Moore, on December 16, 1978, and together the two grew their family to include three children. Jackie was a hard worker and owned a house cleaning business in the Canadian Lakes area for over 30 years. Even when she became sick, Jackie was determined she could, and would still go to work every day. If there was ever a job that needed to be done, Jackie would do it. She rarely sat still because it was just her nature to be doing something. Known by her family as “the boss”, Jackie wasn’t afraid to tell it like it was, and always got the last word. She enjoyed gardening before Mike decided to “weed”, accidentally taking out some of her most favorite flowers; and as you can imagine, that didn’t go over well. Family was everything to Jackie, especially her precious grandchildren. She always put others before herself, even during her last months. Hospice nurses would come to the house and Jackie would ask about their families and life before talking about herself. Her kind-hearted and loving nature will be so greatly missed by her husband of 38 years, Mike Moore; sons, Michael (Amanda) Moore and Brian (Julie) Moore; daughter, Nicole (Tom) Morgan; five brothers; four sisters; grandchildren, Taylor, Andrew, Cameron, and Connor, and one unborn granddaughter, Zoey, that she had looked forward to meeting in August. Sadly, Jackie was preceded in death by her parents; brother, Steve Wilson, and granddaughter, Adalyn Moore. In lieu of flowers, Jackie’s family asks that memorial donations be made to God’s Helping Hands of Mecosta County, Spectrum Hospice, or to the family to go to a scholarship of their choice. Envelopes will be available at the funeral home.

Jackie Ann Moore, our strong and determined wife, mother, and grandmother, passed away Saturday, June 17, 2017 at home, at the age of 60. A memorial service in her honor will be held Friday, June 23rd, at 11:00 AM, at Janowicz Family Funeral... View Obituary & Service Information

The family of Jackie Ann Moore created this Life Tributes page to make it easy to share your memories.

Jackie Ann Moore, our strong and determined wife, mother, and...

Send flowers to the Moore family.