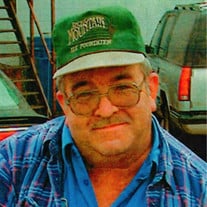 John “Jakie” Doerr, age 65, passed away Saturday, August 23, 2014. His great sense of humor, presence at the Remus Tavern for breakfast with “the gang”, and big smile will be greatly missed by many. Jakie was a true character, he could best be described as “big and Jolly”; one of those people whom was always positive and in good spirits. He had many hobbies and interest that kept him busy including fishing, hunting, bowling, and golfing. Jakie was born in Remus on February 12, 1949, the son of Albert and Edna (Karcher) Doerr. After graduating high school, he went on to be a carpenter by trade. Left to cherish his memory and miss his “special cheese” he always brought to family gatherings are his siblings, Dan ( Linda) Doerr, Vern ( Connie) Doerr, Andy ( Doreen ) Doerr, and Ruth Lobert; and many nieces and nephews. Jakie was preceded in death by his parents; brothers, Vincent, Marvin, Keith, and Paul, and sisters, Avis, Rita, and Teresa. A memorial mass will be held in Jakie’s honor Monday, August 25, 2014, at 11:00 AM, at St. Michael Catholic Church in Remus with Fr. Aaron Ferris as celebrant. Visitation will be held at the church on Monday from 10:00 AM to the time of service at 11:00 AM. In lieu of flowers, those desiring may direct memorial contributions to St. Michael Catholic Church or St. Michael’s School. Envelopes will be available at the church. Friends may share a memory with the family at the church or online at www.hansenjanowiczfuneralhome.com.

The family of John "Jakie" Doerr created this Life Tributes page to make it easy to share your memories.

Send flowers to the Doerr family.