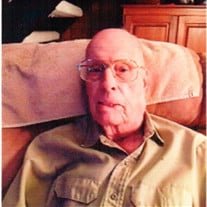 John Booth Huebner, age 85 of Canadian Lakes, passed away Tuesday, March 10, 2015 at Metron of Big Rapids. A memorial service will be held in John’s honor Tuesday, March 17th at 11:00 AM, at Hansen Janowicz Funeral Home in Remus. The family will greet friends at the funeral home on Tuesday from 10:00 AM to the time of service. John was born March 13, 1929, the son of Herbert and Helen (Booth) Huebner. He married the love of his life, Barbara, July 17, 1953, and together they grew their family to include two children. John enjoyed hunting on his property in Newaygo county as well as golfing, which he knew he wasn’t very good at. He loved to be outdoors so he always found work that needed to be done outside. From chopping wood so he and Barbara could have a fire every night in the winter to mowing their very large lawn, John never ran out of work to do outside. He was often quiet and content to be home working on projects. Left to cherish his memory are his wife of 61 years, Barbara; son, Peter (Victoria) Huebner of Cape Coral, FL; daughter, Jean Huebner of Bloomfield Hills, MI; brother, James Huebner of Redding, CA, and grandson, Jonathan. John was preceded in death by his parents. In lieu of flowers, the family asks that donations be made to the Young People Summer Camp Fund at New Hope UMC in Mecosta. Envelopes will be available at the funeral home.

John Booth Huebner, age 85 of Canadian Lakes, passed away Tuesday, March 10, 2015 at Metron of Big Rapids. A memorial service will be held in John&#8217;s honor Tuesday, March 17th at 11:00 AM, at Hansen Janowicz Funeral Home in Remus. The... View Obituary & Service Information

The family of John Booth Huebner created this Life Tributes page to make it easy to share your memories.

Send flowers to the Huebner family.