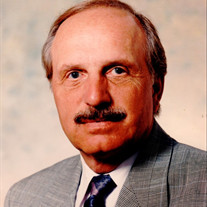 Ken “Scrappy” Stack, of Canadian Lakes, MI, our fun-loving husband, father, and Pops, passed away December 26, 2018, at Spectrum Butterworth Hospital in Grand Rapids surrounded by family, after a valiant battle with cancer. He was 76 years old. Mass of Christian Burial will take place Saturday, January 5th, at 11:30 AM, at St. Mary Catholic Church in Wayne, MI, with Father Sean Bonner as Celebrant. Family will greet friends at Harry J. Will Funeral Home in Wayne, MI, Friday evening from 5:00 PM to 8:00 PM, and again from 11:00 AM to the time of service on Saturday at the church. A private burial will take place in St. Michael’s Cemetery, in Remus, MI.    Ken was born November 6, 1942 in Detroit, MI, the son of Alois and Helen (Modzelewski) Stack. He proudly served his country in the U.S. Coast Guard for five years after graduation from St. Mary’s in 1960, before going to college to earn his Bachelor’s and Master’s Degrees. He married the love of his life, Jeanne on Jan. 7, 1967, and the two grew their family to include three sons. Ken worked as a safety engineer for General Motors for 37 years before his retirement in 2002. While there, he worked on many safety committees including the original airbag team, and the trunk entrapment team. He had a great love for baseball and coached for over 25 years, with one team winning the NABF Senior World Series.  Ken was also an avid golfer. He, his children, and grandchildren played a lot of golf together.  He and Jeanne traveled to Scotland to play at St. Andrew’s Golf Course. Ken also enjoyed fishing, especially with his grandchildren, as family was always most important to him. He had a great sense of humor and was very outgoing. He and Jeanne became very involved members of Canadian Lakes after moving to the area from Utica in 2001. Ken was on many golf leagues there, and was blessed to have made numerous great friends in the area as well.  Ken’s kind and funny ways will be deeply missed by his wife of nearly 52 years, Jeanne Stack; sons, Kenneth Stack Jr., Steven (Elizabeth) Stack, and Ronald (Mimi) Stack; sister, Carolyn (Richard) Reynolds, and grandchildren, Kaitlyn (Anthony) Wojciechowski, Lindsay, Brittany, Sam, Abby, and Justin, as well as, many nieces and nephews including Godson, Brad (Mary) Reynolds.  He was preceded in death by his parents. A special Thank You to the Cancer & Hematology Centers of West Michigan and Spectrum Health Palliative Care for their compassionate care and help during Ken’s illness. In lieu of flowers, those desiring may direct memorial contributions to the American Cancer Society, Hope Lodge  Guest House, 129 Jefferson Ave., S.E., Grand Rapids, MI 49503.

Ken &#8220;Scrappy&#8221; Stack, of Canadian Lakes, MI, our fun-loving husband, father, and Pops, passed away December 26, 2018, at Spectrum Butterworth Hospital in Grand Rapids surrounded by family, after a valiant battle with cancer. He was... View Obituary & Service Information

The family of Ken "Scrappy" Stack created this Life Tributes page to make it easy to share your memories.

Send flowers to the Stack family.