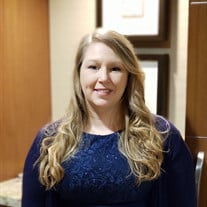 LeighAnne Kim Schrouder of Cottage Grove, Oregon, loving wife, mother, daughter and sister, passed away unexpectedly November 8, 2020. She was only 34 years old.    LeighAnne was born August 20, 1986, in Big Rapids, MI, the daughter of James and MarySue Bieski. She was a graduate of Thornapple Kellogg High School in Middleville, and attended Grand Rapids Community College. She married Kevin Schrouder on April 12, 2013, and the two grew their family to include their daughter, Addison. To say Addison was LeighAnne’s world would be an understatement.  She was a stay at home mom, and loved every minute of it. An adventurous person, LeighAnne enjoyed time spent traveling with Kevin in their motorhome, which they were blessed to do often. Generous, caring and compassionate were all words used to describe her. She had a good sense of humor, a deep love of animals, and treasured her time with family and friends. Left to cherish her memory are her husband, Kevin; daughter, Addison; mother, MarySue Bieski; brother, Jeremy; sisters, Shannon Bieski and Ashleigh (Brandon) Waterworth; mother and father-in-law, David and Barbara Schrouder; brothers-in-law, Robert (Melissa) and Joseph (Melissa) Schrouder; nieces and nephew, Caleb, Mackenzie, and Melany and numerous close friends and other family members.  She was preceded in death by her father, James Bieski, and grandparents, Joe and Millie Bieski, and Charles and Doris Wiedman. A Funeral Mass will be held at St. Michael Catholic Church in Remus, MI at 11:00 a.m. on Monday, November 16th., with Father Tom Boufford as Celebrant.  Visitation will be held at Janowicz Family Funeral Home in Remus on Sunday, November 15th, from 1-4p.m and again on Monday at the church from 10 am to the time of service. In lieu of flowers, memorial contributions can be made to Gift of Life Michigan in LeighAnne’s name.

The family of LeighAnne Kim Schrouder created this Life Tributes page to make it easy to share your memories.

Send flowers to the Schrouder family.