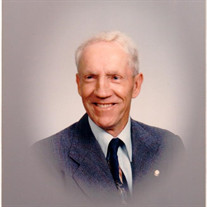 Loren F. Wernette, age 92 of Remus, passed away Thursday, April 6, 2017, at Spectrum Health United Hospital in Greenville. Mass of Christian burial will take place Wednesday, April 12th, at 11:00 AM, at St. Michael Catholic Church in Remus with Fr. Tom Boufford as Celebrant. Burial will follow at St. Michael’s Cemetery with military honors. Viewing will be held Tuesday evening from 5:00 PM to 8:30 PM, at the church (with a rosary service at 8:00 PM) and again on Wednesday morning from 10:00 AM to the time of service at 11:00 AM. Loren was born June 7, 1924, in Remus, MI, the son of Phillip and Gertrude (Schoner) Wernette. At the age of 21, he proudly served his country for a year in the United States Army during WWII. Once he returned home, Loren worked in construction for nearly ten years before he began working for the postal service as a mail carrier, and did so for 21 years. He married the love of his life, Evelyn Esch, on October 9, 1948, at St. Michael Catholic Church, and together the two grew their family to include two children. Loren enjoyed farming, woodworking, flying in his younger years, and spending time with family. He could fix anything and was known as a “jack of all trades”. Humble, loving, and caring were all words used to describe Loren. He had a great sense of humor and was lovingly called “snowball” due to his hair turning snow-white at a very young age. A devout catholic, Loren was a lifetime member of St. Michael Catholic Church, as well as a member of the Rural Carriers Association for many years. Left to cherish his memory are his wife of 68 years, Evelyn; son, Dale (Barbara) Wernette; daughter, Janine( Phillip) Lehnert; grandchildren, Sheri (Rich) Bristol, Scott Wernette, Dave (Amy) Lehnert, Jeff (Mary) Lehnert, Angela (Mike) Bouck, Tina Marie (Anthony) Miller; great-grandchildren, Elijah, Kyle, Sophia, Olivia, Emma, Esther, Levi, Caleb, and Micah, and many nieces and nephews. He was preceded in death by his parents, and siblings, Earl, Leon, Marguerite, Edna, Alice, Bernard, Elizabeth,Wayne, and Phyllis. Those desiring may direct memorial contributions to St. Michael Catholic Church in Remus, or to Spectrum Health Hospice. Envelopes will be available at the church.

The family of Loren F. Wernette created this Life Tributes page to make it easy to share your memories.

Send flowers to the Wernette family.