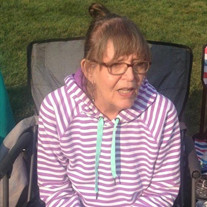 How is one supposed to sum up the life of someone so precious in just a few paragraphs? She was so much more than what can be expressed in this brief obituary. On Sunday, April 8, 2018, pain and suffering was finally ended for one of the most loving, caring, supportive women I have ever met. Marilyn A. (Smith) Rathke passed away peacefully in the arms of her family, after a yearlong battle with cancer. Born December 29, 1945 to Russell and Mabel (Westfall) Smith in Niles Michigan, Marilyn lived all of her life in Shipshewana Indiana. She was preceded in death by her father, Russell Smith and her husband Jerry Rathke. She is survived by her mother Mabel Todd of Middlebury, her mother and father in law Eugene and Leona (Polly) Rathke of Goshen, her sister Regina (David) Stevenson of Angola, her brother David Smith of Thousand Palms CA, her sisters in law Barb Rathke of Jacksonville FL and Beverly Rathke of Bristol, her beloved children, Kristine (Christopher) Smith of Mecosta MI, Jennifer Miller of Lawton MI, Bradley (Christina) Nickell of Bremen, grandchildren Caitlin Smith of Mecosta MI, Leah and Seth Miller of Lawton MI, Antwon Hilson of South Bend, Andre Hilson of Bremen, Janay Hilson, of South Bend, Bryce Nickell of Indianapolis, Dmitri Nickell of Bremen and seven great grandchildren. She married Denny Nickell in 1965 with whom she had her three children. Marilyn adored her children and grandchildren, spending much of her time with them. She married Jerry Rathke in 1986 and remained so until his passing in 2017. She enjoyed life and was loved by all who met her. She worked at Coachmen Industries in Middlebury for over 30 years. When that phase of her life ended, she got up, brushed herself off and moved on to The Blue Gate Craft Barn and then to their Furniture Store in Shipshewana. She loved helping customers and her co-workers were just like family to her. Marilyn loved planting and caring for the beautiful plants and flowers in her yard. Nothing made her happier than seeing her crocus come up in the spring, letting her know that warmer weather would soon be here. Summer was her time, she loved nothing more than sitting in the warm sun and joked about moving to Tennessee where it was warmer. In April of 2017, she was diagnosed with stage 4 cancer. As frightening as this diagnosis must have been for her, she was upbeat and determined to beat it, fighting right until the very end. She was so strong and so unwilling for her loved ones to see how much pain she was in or how tired she really was. Marilyn, your optimism and cheerful attitude will be missed by all whose lives you touched. May your beautiful soul soar free, no longer bound by pain and physical limitations. We love you.

How is one supposed to sum up the life of someone so precious in just a few paragraphs? She was so much more than what can be expressed in this brief obituary. On Sunday, April 8, 2018, pain and suffering was finally ended for one of the most... View Obituary & Service Information

The family of Marilyn Ann Rathke created this Life Tributes page to make it easy to share your memories.

How is one supposed to sum up the life of someone so precious...

Send flowers to the Rathke family.