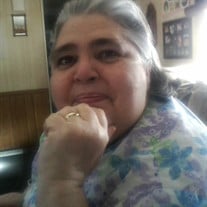 Mary Susan Mitchell, our beautiful and caring wife, mother and grandmother, went to be with her Lord Wednesday, September 23, 2015. She was 60 years old. A funeral ceremony will be held in her honor Saturday, September 26th, at 11:00 AM at Janowicz Family Funeral Home in Remus. Pastor Angela King will officiate with burial to follow in Mt. Hope Cemetery. Visitation will take place Friday evening at the funeral home from 5:00 PM to 8:00 PM. Those desiring may direct memorial contributions to Hospice of Michigan (400 Perry Ave., Big Rapids, MI 49307). Envelopes will be available at the funeral home. Mary was born with the “gift of gab” on October 12, 1954, the daughter of Bernice and Alexander (Winston) Dandy. She married the love of her life, Ed, on October 1, 1970, and together the two grew their family to include six children. Hobbies of hers included crocheting, dancing, doodling, word searches and cooking. Everyone knew her for the smile that was always on her face and the caramel corn she made around Christmas time. Mary enjoyed watching the Tigers and cage fighting on T.V. with her family. She even made (and won) bets against her children on some of the big fights. Her children remember her as being the best mom in the world and her grandchildren remember her as their Meme. Mary’s loving nature and great sense of humor will be greatly missed by her husband of 45 years, Edward; children, Edward Jr. Mitchell (Christy), William (Meghan) Mitchell, Sherry Karns, Jean (Jesse) Johnston, Christine Mitchell and Darlene (Brian) Lintemuth; brothers, Alexander, Guy and Roger; sister, Linda; 31 grandchildren; five great-grandchildren, and her two beloved dogs, Hy-Dee and Baxter. She was preceded in death by her parents and father-in-law, William.

Mary Susan Mitchell, our beautiful and caring wife, mother and grandmother, went to be with her Lord Wednesday, September 23, 2015. She was 60 years old. A funeral ceremony will be held in her honor Saturday, September 26th, at 11:00 AM... View Obituary & Service Information

The family of Mary Susan Mitchell created this Life Tributes page to make it easy to share your memories.

Mary Susan Mitchell, our beautiful and caring wife, mother and...

Send flowers to the Mitchell family.