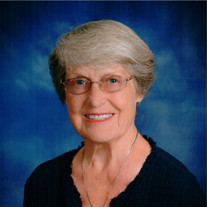 Mary Jane Post age 79 of the Remus area, passed away on Friday, November 28, 2014. A Mass of Christian Burial will be celebrated at 11:00 am on Wednesday, December 3, 2014 at St. Michael Catholic Church in Remus with Father’s Aaron Ferris & Michael Burt as celebrants. The family will greet relatives and friends at 9:30 am until the time of Mass on Wednesday. Mary Jane was born on February 2, 1935 to Ray and Martha (Schiffer) Roe. She grew up in Remus working from an early age at her father’s general store in the town center. She graduated from Remus High School in 1952. Following a year at Davenport Business School, she married Bernard L. Post and to this union was born four children: Deborah Jean, Douglas James, Ronald Eric and Timothy Brian. Over a 12 year period of time, the family moved from Battle Creek to Owosso and then to Mt. Pleasant. In 1965, Mary Jane began working at Central Michigan Community Hospital as Pathology Secretary, retiring 35 years later in administration as Medical Staff Coordinator. Although raised and married in the Methodist Church; in 1992 with the encouragement of her sister, Betty, she revisited her baptismal Catholic faith and received the Eucharistic Sacraments at Sacred Heart in Mt. Pleasant. With her retirement from the hospital in 2000, she moved to School Section Lake and grew in her faith at St. Michael the Archangel parish in Remus. She enjoyed many years in bible study, liturgical art and music ministries, singing for weekend and funeral masses and enjoying the spiritual closeness within these groups. This faith has supported her since 2012 in her battle with lung cancer. Traveling with family and friends over the years made wonderful memories of trips to Japan, Hawaii, Spain, Canada, Italy, Rome, Mexico, Ireland, Alaska, San Diego and sailing down the Hudson River from Albany to Baltimore. Feeding the birds and making quilts for the family filled the Michigan winters; always gardens in the summer and cheering on the Tigers. Mary Jane is survived by her wonderful children who made her life rich with pride and joy; Deb Griffith, Doug (Kathy) Post of Big Rapids, and Tim (Lynn) Post of Temperance, MI; grandchildren, Stefanie (Joshua) Boyd of Big Rapids, Derek (Devan) Post of Big Rapids, Robert (Stacey) Griffith of Fremont, Rachael Lynne Griffith and James Telfer of Big Rapids, Heather (Michael) Westbrook of Grand Haven, Jim (Cathy) Fountain of Big Rapids, Brandy (Steve) Magum, and Shawn (Shawn) Howard of Temperance, MI; several great- grandchildren; a brother, Jim (Joan) Roe of Ocala, FL; and many nieces and nephews around Michigan. Mary Jane also leaves behind her two beloved cats. She was preceded in death by her parents; the children’s father, Bernard in 1983; their son, Ronald in 1986; son-n-law, Roger Griffith in 2007; grandson, Scott Howard in 2012; sisters, Agnes (Charles) Newell and Betty (Joseph) Pollard. In Lieu of flowers, those desiring may direct memorial contributions to God’s Helping Hands or to St. Michael’s School. Envelopes will be available at the church.

Mary Jane Post age 79 of the Remus area, passed away on Friday, November 28, 2014. A Mass of Christian Burial will be celebrated at 11:00 am on Wednesday, December 3, 2014 at St. Michael Catholic Church in Remus with Father&#8217;s Aaron Ferris... View Obituary & Service Information

The family of Mary Jane Post created this Life Tributes page to make it easy to share your memories.

Mary Jane Post age 79 of the Remus area, passed away on Friday,...