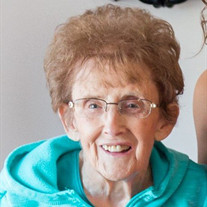 Mary Beatrice Wright, age 87 of Mecosta, passed away on September 18, 2019. A Memorial Mass will be held on Sat., September 21, 2019 at St. Michael Catholic Church at 11:00 AM, with Father Tom Boufford as Celebrant.  Visitation will be Fri., September 20that Janowicz Family Funeral Home in Remus from 6:00 PM to 8:00 PM, with a rosary service at 7:30 PM.    Mary was born December 13, 1931, the daughter of John and Lena (Whalen) Battle. She married the love of her life, Harold Wright, on May 24, 1951, and the two spent 52 wonderful years together before Harold passed in 2008. Mary was a homemaker most of her life, caring for her children and anyone who stepped foot in her house. If you stopped for a visit, you could always count on being fed well in her immaculately kept home. She was a great cook and baker, known best for her delicious pies and big Sunday dinners each week. When her kids were grown, Mary took a food service job with Ferris, and truly enjoyed her work for nearly 20 years. She adored time spent with her and Harold’s Remus group of friends, whether it was a night out dancing, or a vacation out of state, the group shared many great memories together. She was a devoted wife, feisty mother, and loyal friend. She loved her church, and her grandchildren and great-grandchildren (which were her whole life).  Left to cherish her memory are her children, Gary Wright, Sharon (Clifford) Metcalf, Diane Hering, Ronald Wright, Terry Wright, and Roger Wright; siblings, Barbara (Ron) Baker, Kathleen (Gary) Hutson, Romaine (Tom) Magda, and Bobby Battle; 11 grandchildren, and eight great-grandchildren.  Sadly, Mary was preceded in death by her husband, Harold; son, Brian; siblings, Tom, Mike, and Sonny Battle, and Dorothy Kardos; sisters-in-law, Judy Battle and Maxine Battle, and brother-in-law, Laverne Kardos.  Those desiring may direct memorial contributions to St. Michael Catholic Church or School, in remembrance of Mary. Envelopes will be available at the funeral home and church.

Mary Beatrice Wright, age 87 of Mecosta, passed away on September 18, 2019. A Memorial Mass will be held on Sat., September 21, 2019 at St. Michael Catholic Church at 11:00 AM, with Father Tom Boufford as Celebrant.  Visitation will be Fri.,... View Obituary & Service Information

The family of Mary Beatrice Wright created this Life Tributes page to make it easy to share your memories.

Mary Beatrice Wright, age 87 of Mecosta, passed away on September...

Send flowers to the Wright family.