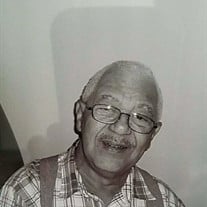 Obituary of Maurice Lynn Jones Maurice Lynn Jones, age 76, of Six Lakes, passed away peacefully, March 13, 2018, at Lakeview Long Term Care Facility, with his daughter by his side. A funeral ceremony will be held Saturday, March 17, 2018, at 2:00 PM, at Janowicz Family Funeral Home in Remus, with Pastor Patricia Tefft officiating. Burial with military honors will immediately follow the service in Decker Cemetery. Visitation will be held Saturday afternoon, from 12:00 PM to the time of service at 2:00 PM.   Maurice was born April 25, 1941, the son of Kenneth and Ethel (Bolden) Jones I. After he graduated from high school, Maurice proudly served his county in the United States Army for nearly 20 years. He worked for the Lakeview School system for ten years driving school bus and eventually retired from GM after 30 years. An avid fisherman, Maurice was counting down the days until he could be back out on the water in his boat. Hunting was another favorite of his, as he enjoyed anything that could be done outside. Maurice had a great sense of humor, and loved to tease. He mastered the art of storytelling early on in life, and never lost it. During his last 20 years, he came to know the true meaning of life, and cherished every moment spent with family, especially his grandchildren.    Maurice will be greatly missed by his son, Juan Jones; two daughters, Grace Williams and Cynthia Lehnert; four grandchildren, Marcella Jones, Elizabeth Williams, Wesley (Carlie) Williams, and Rosalie Williams; two great-grandchildren, Myles Vasquez and Mariana Vasquez; beloved mother of his children, Betty Jones, and a host of nieces, nephews, and great-nieces and nephews.   He was preceded in death by his parents and two siblings, Kenneth Jones II “Sonny”, and Doris Jones. To plant a tree in memory of Maurice Jones, please visit Tribute Store

Obituary of Maurice Lynn Jones Maurice Lynn Jones, age 76, of Six Lakes, passed away peacefully, March 13, 2018, at Lakeview Long Term Care Facility, with his daughter by his side. A funeral ceremony will be held Saturday,... View Obituary & Service Information

The family of Maurice Lynn Jones created this Life Tributes page to make it easy to share your memories.

Send flowers to the Jones family.