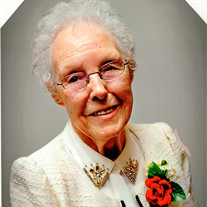 Opal Marie (Warner) Smith, age 91 of Remus, passed away peacefully at home surrounded by family Tuesday, December 2, 2014. A funeral ceremony will take place Friday, December 5th at 11:00 AM. Pastor Wayne Shidler will officiate with a luncheon to follow at the Wheatland Twp. Hall. Family will be at the funeral home to greet friends on Thursday evening from 5:00 PM to 8:00 PM, and again on Friday from 10:00 AM to the time of service. Opal was born December 17, 1922, the daughter of Floyd and Muriel (Shaw) Bush. She was actively involved with the Pine Grove Tabernacle and enjoyed her quiet time reading. Other hobbies of Opal's would include fishing, typing, quilting, embroidery and watching old T.V. shows from the 40's and 50's. Precious, loving, caring, a special person, and golden lady were all words used to describe her. She will be greatly missed and fondly remember by her son, Lyle (Judy) Warner; daughters, Lou Ann Moore and Kaye (Jim) Peasley; daughter-in-law, Lois Warner; brother, Donald (Vivian) Bush; sister, Rosie Warner; 12 grandchildren; 29 great-grandchildren, and two great-great-grandchildren. She was preceded in death by her parents; two husbands, Lyle Warner and Carl Smith; sons, Dick and Mike Warner; brothers, Kenneth, L.D. and Fred Bush, and sisters, Beatrice Aldrich and Barbara Fredickson.

The family of Opal Marie Smith created this Life Tributes page to make it easy to share your memories.

Send flowers to the Smith family.