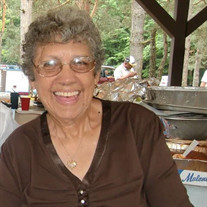 Patricia Ann Burns, our loving mother, grandmother, sister, daughter, and "big mama", died Sunday, October 2, 2016. A funeral service will be held Sunday, October 9th at 3:00 PM at Janowicz Family Funeral Home with Pastor J.D. Saunders officiating. Visitation will be held Sunday from 1:00PM to the time of service. Patricia was born March 31, 1941 the daughter of Otis and Helen (Johnson) Guy. She married Alfred (Moose) in 1963 and together the two grew their family to include three children. She worked as a furniture finisher at Kendall Furniture in Grand Rapids for 26 years before Moose told her she could either call and tell them she was retiring or he would. She enjoyed flower gardening, putting together picture collages, and cooking. Family and friends came to expect their favorite treat on their Birthdays and Holidays. They also knew she would always bring one of her beautifully done food trays to any event or family function she attended. Writing was a passion of hers, family members would receive beautifully written letters and life tributes on both anniversaries and Birthdays. Those are now priceless mementos her family holds dear to their hearts. Patricia was very close with a couple of her uncles and a favorite pastime of hers was driving them around in their fancy cars as a teenager. Growing up together, they always played pranks on one another and had numerous inside jokes. Loving, stubborn, funny and caring were all words used to describe Patricia. Although she had many hobbies and interests, family was always put first. Left to cherish her memory are her mother, Helen; children, Dawn Burns, Loran Burns (Donnie Anderson), and Sherri Burns; step-children, Derrick Burns and Donna Robinson; brother, Lewis Guy; sister, Bonna Guy-Rice (Dennis); brother-in-law, Gordon Burns; grandchildren, Cameron Burns, Adrianna Burns, and Gabriel Burns; six step grandchildren; five step great-grandchildren; two nephews, Terry Guy and Dalton Rice, and three great-nephews, Chris, Roderick, and Jonathan Guy. She was preceded in death by her father and husband of 48 years, Alfred.

The family of Patricia Ann Burns created this Life Tributes page to make it easy to share your memories.

Send flowers to the Burns family.