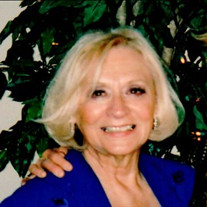 Patricia Marie Couvreur, loving wife and mother, passed away Wednesday, June 13, 2018, at home, with her loved ones at her side at the age of 82.  She is now out of pain and is with her Savior and Lord.  A funeral mass will be held Thursday, June 21st, at 11:00 AM, at St. Michael Catholic Church in Remus, with Father Tom Boufford as Celebrant. Visitation will be held Wednesday evening, June 20th, at Janowicz Family Funeral Home in Remus, from 4:00 PM to 7:30 PM, with a short memorial service at 7:00 PM and again on Thursday morning one hour prior to the service at church.    Pat was born February 8, 1936, the daughter of Henry and Catherine (Stephenson) Collins. She was raised in the Detroit area, and worked as Property Manager for a large apartment complex in the Downriver area for over 20 years.   When her daughters were young she was very active as PTA President and as leader of the Girl Scouts. Pat did it all. She was her own person, never following the crowd, and that’s what so many people loved about her. Known as “Chatty Patty”, she could strike up a conversation with anyone and made friends everywhere she went. Pat, in her younger years was a terrific figure skater.  She also enjoyed golfing, playing Bridge, admiring her geraniums on the porch, and of course, shopping. She adored her many trips to her daughter’s apartment in New York City, as well as traveling to see her grandchildren throughout Michigan and Oklahoma. Pat was known to be effervescent, outgoing, and never spoke a bad word about anyone. She deeply enjoyed her 30 years in Canadian Lakes, and was blessed to have such a loving and wonderful circle of friends there.  Left to cherish her vibrant memory are her husband, Joseph Couvreur; daughter, Patty; many grandchildren and great-grandchildren, as well as numerous close relatives and friends.  She was preceded in death by her parents, and daughter, Kim.  Those desiring may direct memorial contributions to Spectrum Hospice (Spectrum Health Foundation), 100 Michigan St NE, Grand Rapids, MI 49503 or to St. Michael’s School in Remus, 8944 50th Ave. Remus, MI 49340.

Patricia Marie Couvreur, loving wife and mother, passed away Wednesday, June 13, 2018, at home, with her loved ones at her side at the age of 82.  She is now out of pain and is with her Savior and Lord.  A funeral mass will be held Thursday,... View Obituary & Service Information

The family of Patricia Marie Couvreur created this Life Tributes page to make it easy to share your memories.

Send flowers to the Couvreur family.