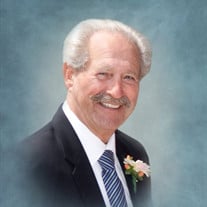 Robert Roy "Bob" Bailey, age 88 of Mecosta, passed away December 20, 2018, at his home with family at  his side.  A memorial mass will be held Saturday, June 15, 2019, at 11:00 A.M., at St Michael Catholic Church in Remus, with Father Tom Boufford as Celebrant.  Visitation will be held at the church one hour prior to the service. Bob was born August 11, 1930, the son of Roscoe and Isabel (McKee) Bailey.  He was a proud United States Marine, serving his country during the Korean war.  Bob worked as a painter for General Motors for 40 years before his retirement in 1988.  He and his wife,  Helen, began traveling to the Mecosta area in 1994, and moved to their home on Lake Mecosta in 1998.  Weather permitting, Bob could be seen fishing the Tri Lakes.  He had many favorite fishing spots on the lakes and shared their location with few.  Bob made and repaired many fishing rods for friends, relatives and fund raising events.  An Avid outdoorsman, Bob also enjoyed hunting and golfing.  Bowling was another favorite sport of his and he could often be found at the Remus Bowling Center.  A proud veteran, Bob was a member of the VFW, American Legion, AMVETS, Eagles, and was a Lifetime member of the Elks.  He and Helen were also members of Canadian Lakes for 18 years, becoming very involved in the community.   Bob enjoyed life and lived it to the fullest.  He was blessed with a beautiful family and many good friends. He lived a good life and in his own words, "I did everything I wanted to." Left to cherish his memory are his wife of 42 years, Helen Bailey; children, Steven (Beth) Bailey of Lansing, Kenneth (Diane) Bailey of Virginia Beach, VA and Ann (Steven) Slocum of DeWitt; sister-in-law, Patricia Koski and Roselyn Connolly; brother-in-law Paul (Diane) Connolly; grandchildren, Andrew (Amanda) Slocum, Amber (Aaron) Jankowski and Lindsey Bailey; great-grandchildren, Jackson and Dexter Slocum, and Wyatt and Ayla Jankowski, and many nieces, nephews and special friends, Bob McCall, David Ellis, Harry and Mary Ann Wilson. Bob was preceded in death by his son, Richard; his parents; stepfather, Vito Presacano and brothers-in-law, Willard Koski and Joseph Connolly. The family would like to thank Spectrum Hospice, who's staff assisted the family caring for Bob, especially Star and Alex. Those desiring may direct memorial contributions to St. Michael's School or to Spectrum Hospice.  Envelopes will be available at the church.

The family of Robert Bailey created this Life Tributes page to make it easy to share your memories.

Send flowers to the Bailey family.