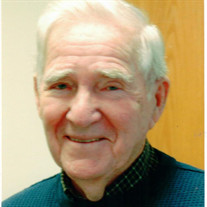 Robert “Bob” Earl Vaillancourt, age 90 of Canadian Lakes, passed away Saturday, October 29, 2016 at his home surrounded by his loving family. A memorial service in Bob’s honor will be held Saturday, November 12, 2016, at 11:00 AM, at St. Andrew’s Episcopal Church in Big Rapids. Reverend Gary Hamp will officiate with a luncheon to follow at the church. Family will greet friends from 10:00 AM to the time of service at 11:00 AM. Bob was born July 4, 1926, the son of Thomas and Nancy (Curraugh) Vaillancourt. He married the love of his life, Berniece Bowers, on April 16, 1948, and together the two grew their family to include two children. Starting as a young child, Bob had a great passion for Aviation. At the age of 16, he began working at a local airport and was paid with air time; and by the age of 17, he volunteered to join the United States Army Air Corp as a cadet pilot. The war ended as he was finishing his training, and was honorably discharged in 1945. Bob retired from General Motors after investing over 30 years into their aircraft ground operations as a superintendent. Bob’s children fondly remember the days of flying with both mom and dad. Since Berniece was also a pilot, they were able to choose which parent they wanted to fly with that day. When he wasn’t in the air, Bob could be found fixing up old airplanes to sell. He also enjoyed doing oil paintings and photography. A true artist, Bob greatly influenced both his children and grandchildren in many ways. He was a collector of stamps and a huge sports fan. He liked anything U of M so his family was glad to see his team made him proud on Saturday. An avid golfer, Canadian Lakes was the perfect place for Bob to reside. He and Berniece shared many fond memories of their time at Canadian Lakes with friends and family. A quiet soul, a good man, and “sports-a-holic” were all words used to describe Bob. He will be greatly missed by his wife of 68 years, Berniece; children, Michael (Barbara) Vaillancourt and Margaret (James) Derezinski; seven grandchildren, and ten beautiful great-grandchildren. He was preceded in death by his parents. Those desiring may direct memorial contributions to the Manna Pantry – St. Andrew’s. Envelopes will be available at the church.

The family of Robert "Bob" Earl Vaillancourt created this Life Tributes page to make it easy to share your memories.

Send flowers to the Vaillancourt family.