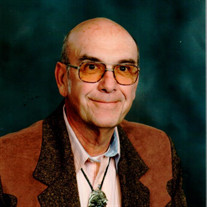 Robert Norris Cathcart, our loving father, grandfather, and great-grandfather, passed away on Wednesday, June 14, 2017, at Portland Assisted Living. A Memorial Mass will be held in his honor Thursday, June 22nd, at St. Michael’s Catholic Church in Remus, at 11:00 AM, with Bishop David Walkowiak as Celebrant. Burial will follow the service in St. Michael’s Cemetery. Visitation will take place Wednesday, June 21st from 5:00 PM to 8:00 PM at Janowicz Family Funeral Home in Remus, with a rosary service at 7:30 PM. Bob was born May 3, 1938, the son of Robert and Alice (Rakosky) Cathcart. He married the love of his life, Helen Jo (Harker) on July 9, 1960, and together the two grew their family to include three children. Bob was a devoted husband, father, and grandfather. He was a very service oriented person, always looking for ways to help others and placing their needs before his own. He was a teacher earlier in life as well as a football and wrestling coach. After receiving his Master’s Degree from Notre Dame University, Bob was the principal of numerous catholic high schools. His heart eventually led him to be ordained a Deacon in the Catholic church for which he served for 11 years before retiring in 2013. Caring, funny, and tolerant were all words used to describe Bob. He was known to have a tough exterior with a soft heart, and a wonderful sense of humor. He spent a good portion of his life in Portland, MI, but his heart was in the Mecosta area. He truly enjoyed his time serving as a deacon at St. Michael’s Catholic Church. While living on Lake Mecosta, Bob enjoyed fishing as often as he could, and rooting for Notre Dame every chance he got. Left to cherish his memory are his two sons, Gregory (Lisa) Cathcart, and Jeffrey (Laurie) Cathcart; daughter, Deborah (Allen) Pung; brother, Charles Cathcart; grandchildren, Joshua, Justin (Meagan), and Caleb Pung, Robert and Matthew Cathcart, and Cody, Mallory, and Mackenzie Cathcart; and great-granddaughter, Piper Jo Pung. He is preceded in death by his parents and wife Helen Jo who passed away in 2008. In lieu of flowers memorial contributions can be made to Great Lakes Caring Hospice or St. Michael's Parish.

The family of Robert Norris Cathcart created this Life Tributes page to make it easy to share your memories.

Send flowers to the Cathcart family.