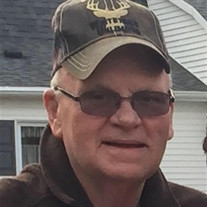 Robert “Bob” Taylor Sr., age 73 of Rodney, MI, passed away at home Tuesday, February 14, 2017. A funeral service will be held Friday morning at 11:00 AM at the Sylvester Community Church with Pastor Richard Taylor officiating. Visitation will also take place at the church on Thursday evening from 5:00 PM to 8:00 PM, and again on Friday morning from 10:00 AM to the time of service at 11:00 AM. Burial will take place at Mount Hope Cemetery in Mecosta immediately following the service. Bob was born November 15, 1943, the son of Doyle and Elsie (Reimer) Taylor. He was locally educated through Mecosta Schools before going to work for Centurytel as a repairman for 37 years. He married the love of his life, Karen Burhans, on May 21, 1966, and together the two grew their family to include three children. Bob enjoyed hunting, fishing, playing cards, and embellishing stories. He truly had the “gift of gab” and was able to talk to anyone about anything. His family always knew a quick trip to the store for Bob would turn into him being gone for three hours. He was constantly on the move, whether it was going to the casino, traveling, or just running into town “quick”, Bob was always doing something other than sitting at home. He knew everything (according to him) and was lovingly referred to as, “The Book of Knowledge”. Bob always had to have the final say and liked being in charge; this habit coined him the name Sarge. Known for his great sense of humor, Bob shared many laughs with his beloved family and friends over the years. Left to cherish his memory are his wife of 50 years, Karen; children, Bob Jr. (Brenda) Taylor and Angie (Dave) Peters; brother, Gordon “Buck” (Evon) Taylor; grandchildren, Cory (Fawn) Taylor, Bryce (Chandra) Taylor, Hadlee Peters, Tabitha (Scott) Ripley, Melissa Wagner, and Kevin LaFountain, and many great-grandchildren, nieces and nephews, and special friends. Sadly, Bob was preceded in death by his son, Andrew Taylor, his parents, and granddaughter, Danielle Scholten. Those desiring may direct memorial contributions to The American Cancer Society Hope Lodge – Grand Rapids at, 129 Jefferson Ave. S.E., Grand Rapids, MI 49503. Envelopes will be available at the church.

The family of Robert "Bob" Taylor Sr. created this Life Tributes page to make it easy to share your memories.

Send flowers to the Taylor family.