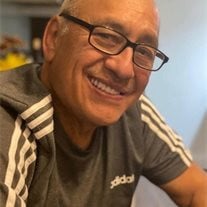 Roberto “Bob” Villa, age 69 of Canadian Lakes, passed away Monday, April 5, 2021. Visitation will be held Friday, April 9that Saint Michael Catholic Church in Remus, from 10am to 11am, followed by Mass of Christian Burial at 11am. Burial will follow in Saint Michael’s Cemetery.    Roberto was born May 20, 1951, to David Villa and Cecelia Martinez. He married the love of his life, Josephine, in July of 1970, and together the two grew their family to include eight children. Known for his big heart, Roberto easily made friends everywhere he went. He enjoyed working out, swimming, and spending time with his beloved family. A devout Catholic, faith was the center of his life. You could always count on Bob to be at special occasions and events, wanting to continually support his friends and family. His love for traveling took him to many different places, all of which he would take a photo, post it to Facebook, and ask, “where am I?” A giver of his time and talents, Bob was constantly giving back to his community. Whether through volunteering at God’s Helping Hands, working on community projects, or making a monetary donation to the needy, Roberto always felt it was right to give when able.  His selfless and devoted nature will be deeply missed by his children, Rosa (Dan) Brown, Bobby Villa (Kristie Rosendahl), Cisco (Amy) Villa, Danny Villa, Rita Villa (Mealo Lugo), Santino (Heidi) Villa, Amelia Villa (Marco Almonaci), Luis (Katie) Villa,; seven siblings; 24 grandchildren; eight great-grandchildren, and many close friends and relatives. Roberto was proceeded in death by his parents; wife, Josephine in 2015.  In lieu of flowers, a donation can be made to a charity of your choice.

Roberto &#8220;Bob&#8221; Villa, age 69 of Canadian Lakes, passed away Monday, April 5, 2021. Visitation will be held Friday, April 9that Saint Michael Catholic Church in Remus, from 10am to 11am, followed by Mass of Christian Burial at 11am.... View Obituary & Service Information

The family of Roberto Martinez Villa created this Life Tributes page to make it easy to share your memories.

Send flowers to the Villa family.