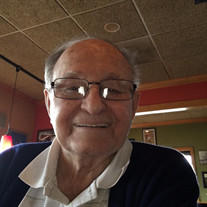 Rudolf “Rudy” Rust, age 90, of Mecosta passed away at his home in the presence of his loving family, Tuesday, November 15, 2016. A Memorial Mass for Rudy will be held Tues., Nov. 22, 2016 at 11:00 AM at St. Michael Catholic Church in Remus, with Father Tom Boufford as celebrant. There will be a visitation for family and friends from 10:00 AM until the time of the service at 11:00AM. Burial will take place at St. Michael’s Cemetery immediately following the service. Rudy was born January 24, 1926, in Gleiwitz, Germany, the son of Adolf and Sophie (Oppler) Rust. In 1948, he married the love of his life, Ann (Hennig), who preceded him in death on May 17, 2015. He and Ann were married in Germany, and enjoyed many trips back to their home country together over the years. Rudy and Ann moved to Mecosta, Michigan in the fall of 2013 and enjoyed their short time together there. Rudy enjoyed studying his family’s Genealogy, being outside and staying active. The social butterfly that he was, Rudy thoroughly enjoyed being in the presence of others and sharing his life stories with them. His family says he always kept up on anniversaries, birthdays and other special occasions by making phone calls and sending out cards. Left to cherish his memory are his son, Alfred (Debbie) Rust; three daughters, Christa (James) Strack, Darlene (John) Godbehere, and Linda Mayer; grandchildren, Shaun, Shannon and Danielle; seven great-grandchildren, and many nieces and nephews. Those that preceded Rudy in death were his parents and his wife, Ann. Memorial contributions may be made to St. Michael’s School at, 8944 50th Avenue, Remus, Michigan 49340, or to Spectrum Hospice at http://www.spectrumhealth.org/foundation/ways-to-give in honor and memory of Rudy. Envelopes will also be available at church.

The family of Rudolf "Rudy" Rust created this Life Tributes page to make it easy to share your memories.

Send flowers to the Rust family.