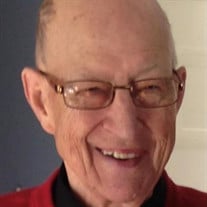 Sherman Dale Loken, age 85, of Canadian Lakes passed away peacefully at his home surrounded by family Sunday, September 19, 2021. He was born October 18, 1935 in Brinsmade, North Dakota, the son of Oscar Loken and Alma ((Engen) Loken. Sherm graduated from Leeds High School in North Dakota. He attended Concordia College and Interstate Business College in Moorhead, Minnesota before beginning a 40 year career with GMAC in 1956. In 1964 he married Marilyn Kay Hofer in Huron, South Dakota. Following moves to Arlington Heights, Illinois, Dayton, Ohio, and Rochester Hills, Michigan, he retired September 1, 1996. In 2001, Sherm and Marilyn moved to their first home in Canadian Lakes and in 2006 built their current home there. Sherm was known as a very kind, gentle, helpful man, who had a wonderful sense of humor. His family and friends were most important to him. He also enjoyed golfing, fishing table tennis, music of any kind, travel, and volunteering. He is survived by his wife of 57 years, Marilyn; two sons, Brian (Sandy) of Kalamazoo, Robert (Meagan) of Lake Orion; six grandchildren; two brothers, Earl and Arden Loken; one sister, Jean, of North Dakota; and several nieces and nephews. Funeral services will take place at 11:00am Saturday, October 23, with a visitation starting at 10:00am at The United Church of Big Rapids, 120 South State Street, Big Rapids, Michigan 49307. Those wishing to make a donation in memory of Sherman are asked to consider Spectrum Health Hospice or organizations supporting pancreatic cancer research at www.v.org or www.pancan.org

The family of Sherman Dale Loken created this Life Tributes page to make it easy to share your memories.

Send flowers to the Loken family.