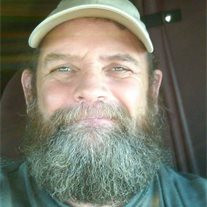 William Andrew Ogan, age 61 of Romulus, MI (Formerly of Remus) passed away on August 3, 2019 at Beaumont Hospital in Dearborn.  A funeral service will be held on Saturday, August 10th, at 1:00 PM, at Janowicz Family Funeral Home in Remus, with Pastor Randy Piatt officiating.  Visitation will be held Saturday from 12:00 –1:00 PM at the funeral home.  William was born November 13, 1957, the son of William and Nancy (Smith) Ogan. After finishing high school, William went on to proudly serve his country in the United States Navy for four years. He then began truck driving and enjoyed that as his profession for many years. William married the love of his life, Katherine, on December 17, 1985, and together the two grew their family to include three children. Williamcould fix anything, and would often “tinker” in his spare time. He was best known for his great sense of humor, even if it was occasionally inappropriate. He loved food, with lasagna being his favorite, and he was an avid coke drinker.  His family was very important to him, finding most of his joy in his grandchildren.  His Granddaughter, Victoria, was his “travel buddy” and they enjoyed many, many places together.  He loved being a “papa” and found that to be his biggest achievement in life.  William also enjoyed art, which was something he passed down to his grandchildren. His humorous ways and caring nature will be deeply missed by his wife of 33 years, Katherine Ogan; children, Matthew Ogan, Linsey (Neil) Smith, and Andrea Hickman; siblings, Rose (Jim) Hickman, Sue (Rick) Hirt, Beth (Don) VandenHeuvel, Cathy(Jeff) Barker and David (Deb) Ogan; grandchildren, Victoria, Jeffrey, Trevon, Xavier, Nathaniel, Charlotte, and Mason, and one great-granddaughter, Rosemary.  William was preceded in death by his parents; sister, Laura Leigh; stillborn brother, Michael, and beloved dog, Max.  Those desiring may direct memorial donations to the Childhood Leukemia Foundation (807 Mantoloking Road, Brick, New Jersey 08723), or to the U.S. Dept. of Veterans Affairs (volunteer.va.gov) in William’s name. Envelopes will be available at the funeral home.

William Andrew Ogan, age 61 of Romulus, MI (Formerly of Remus) passed away on August 3, 2019 at Beaumont Hospital in Dearborn.  A funeral service will be held on Saturday, August 10th, at 1:00 PM, at Janowicz Family Funeral Home in Remus, with... View Obituary & Service Information

The family of William Andrew Ogan created this Life Tributes page to make it easy to share your memories.

Send flowers to the Ogan family.